Huddly, a Norwegian start up announced the GO camera in early 2017. To date (November 2017) they are still taking pre-orders for this $500 webcam although it's available as part of Google's new $1,999 Hangouts kit. This article will discuss some features of the Huddly GO without the benefit of a hands on test.


720p
The output of the camera is 720p. In 2017, this doesn't make much sense as the Logitech Brio is capable of 4k resolution for around $200 and there are many other cameras available that are 1080p. Years ago 720p was the top end of video conferencing camera resolution mainly because network limitations prevented anything higher (or even that high) from being transmitted through the codec.

Per the Spec Sheet, the camera has a 16mp sensor. I'm trying to understand the need for such a large sensor if the output is only a small segment of that. Future considerations may be one reason. Electronic PTZ may be another, but I don't think so after reviewing the below video. Outputting 720p from a 16mp sensor means the output is going to be much smaller than 120 degrees if you intend to digitally pan and tilt off of the original image so here is my guess: You'll need to zoom first (and reduce the original FOV) before you can pan around. With that, you'll only be able to pan to the limits of the original 720 raster. If you can pan (without zooming) beyond the extents of the original 720 image, the lens can't be 120 degrees. It's would have to be bigger but the effective FOV becomes 120. At the end of the day, I can't wrap my head around the choice for 720p output. It could have been a cost measure but since there is already a large sensor in it, that expense is already there. One can assume that future firmware will have this camera outputting a much higher resolution.

Loss less zoom
If we take a 1080p camera and zoom in, the image starts to blur as the visible pixels become larger on the display. Maybe the camera intentionally outputs 720p regardless of zoom to achieve "loss less zoom". That's a complicated function within the hardware, and I'm not sure the result is worth it, but it's doable.

Realtime de-warping
The data sheet says the camera has real time de-warping. What is that? When a lens has a wide field of view (FOV) it rounds the corners and makes straight lines look curved. Do a Google image search for fish eye lens and you'll see what I mean. De-warping is accomplished by using a warping chip and applying a mathematical algorithm before the image is outputted, bending the image to make those curves straight. It's a hardware and firmware function, but calling it "realtime" doesn't exactly make sense. The warp chips from iChips and GeoSemi add negligible latency and really every camera used for video conferencing is in fact, real time. It wouldn't be useful if it wasn't. 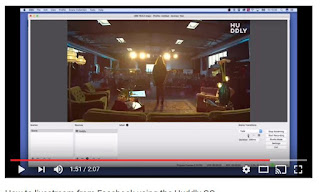 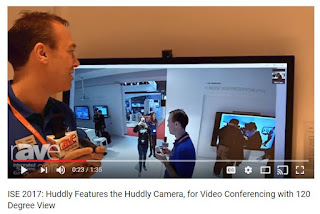 The above are examples of the camera image. Notice the curvature.

Price $499
The Logitech Brio is as low as $184 at the time of writing. Of course, Logitech is a large company that can operate on smaller margins to get marketshare in terms of quantity. For $499, something else needs brought to the table to justify spending that much on a webcam. Of course, Google is trying to paint the picture that this camera can be used in a conference room. In reality, it may be acceptable for up to 4 people sitting really close in a huddle type environment. It's not appropriate for an eight to ten seat conference room - no web cam is.

Pairing with Google Hangouts
I'll start this by saying that I've never been a fan of Hangouts. The quality ranks among the poorest in my subjective field testing in both video quality and audio to video sync. This is Google's second attempt to get into the enterprise video market this time pairing Huddly's camera with an audio device, a touch screen and a Chromebox. The big problem here is the Chromebox and being forced into Google's eco system. This partnership may help sell a few cameras, but my guess is the real hope is to sell the company to Google. However, according to CrunchBase they have raised over $21 million making any purchase hard to happen while keeping the investors happy.

Final notes
Huddly has done a fantastic job of marketing, however in the months since its reveal the camera is still not shipping unless you're buying the package with Google.

The above comments are from subjective studying of pictures and videos, seeing the camera in a limited amount of time at Enterprise Connect 2017 and reviewing documentation. These are my opinions only and they may or may not be accurate. I've not had one in my hands to test and then take apart. It's up to the user to obtain and perform their own testing to see if this is the right camera.