How to handle yourself in a lecture

Recently back from the Midwest Veterinary Conference, it occurred to me that something needed to be said about the participants of lectures. This goes across industry lines, subject matter and genre of lectures.


Unfortunately, some people can't help themselves and don't think about anyone other than them. Here are some actual events that occurred in the half dozen lectures I attended last week. 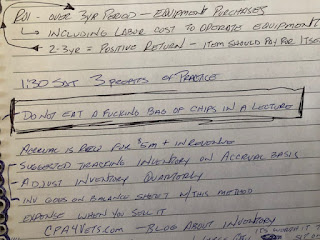 I don't have a need for continuing education credits so I attend lectures to learn something. It gets frustrating when lecturers can't get through their material on tax policy (for example) because someone wants to complain about politics.

The know it all person - don't be like them. It's my assumption that you're there for CE because you "obviously" know more than the lecturer, blurting out things like "That's not right" in the middle their talk. We get it, you're a superstar but I didn't pay to hear you talk. STFU

The free advice person - attending a lecture given by a CPA doesn't mean you need to continually pump them for free advice during their lecture regarding your specific situation.

The lecturers were very professional this weekend and I don't know how they do it. That sort of behavior would distract me to no end.