It seemed that most review sites I went to had these in their top five. Zagg hit top three on eight sites and both the Spigen and Tech Armor were top three on six sites. I ended up with the Tech Armor from this list due to price, which was $8.95 to my door from Amazon. 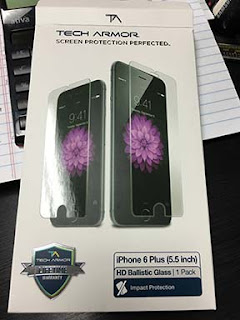 This is a box

The Tech Armor protector does seem to be much more prone to finger prints than the native 6s Plus screen. It's no big deal to just wipe it off though. The interesting thing it that my screen seems much more responsive and easier to scroll and swipe now with it installed. 3d Touch works just the same as I don't notice any difference. Other then feeling it every time I hit the "Home" button, I don't know it's there. It measures 0.38mm in case you were wondering.

The necessity for screen protectors is extremely debatable. This is actually my first ever protector so I've not been through the "been there, done that" philosophy of putting one on before something eventually happens. I'm usually pretty careful but I thought for $9 I would give it a shot.